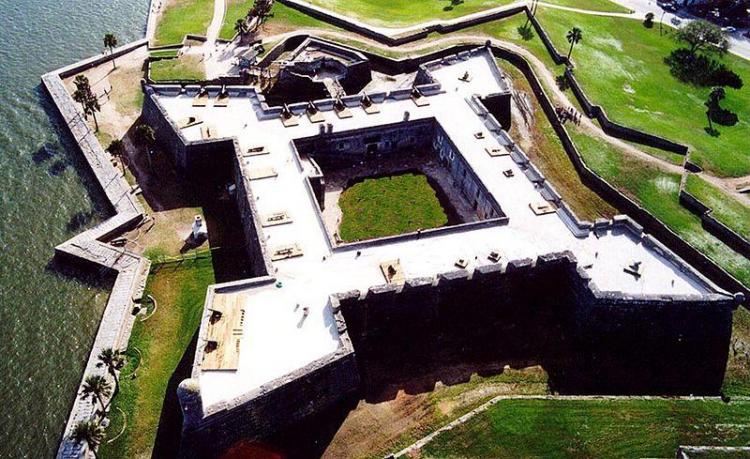 September 13th, 1814, recognized as the morning Francis Scott Key awoke to find Fort McHenry still waving the American Flag after being bombarded all night long by British Ships in Boston Harbor. The brave Patriots were still fighting as the sun rose and the British Soldiers with their American captives could see the flag still flying. An impressive event that led to the song “The Star Spangled Banner” which today is our national anthem.

​That certainly was not the British first or last bombardment battle where they attacked another countries fort, in what is todays United States, and …..lost! They tried the same tactic here in St. Augustine on November 10th, 1702. General Moore’s plans to attack the Castillo were thwarted by the Spanish stampeding 162 head of cattle through the British lines as they burned the Church at Nombre’ de Dios successfully herding the cattle into the dry moat at the Castillo and ensuring food supply for the 1,500 people who were seeking refuge in the fort. The siege by the British would last 57 days.

​The heaviest fighting occurred on November 25 that same year, when both sides engaged in a 24 hour duel with constant cannon firing and the British realizing the cannons they brought were too small to be effective against infamous coquina walls of Castillo de San Marcos. During that day both sides burned houses in the town, leveling buildings to clear paths for the cannons to fire. Moore sent orders to Jamaica for reinforcements and larger artillery.

​On December 24th reinforcements for Moore’s troops and supplies arrived in St Augustine Harbor from Charlestown,SC. St. Augustine remained strong, when on daybreak two days later, four Spanish Man-O-War ships arrived. Moore quickly burned his own ships so they are not captured by the Spanish, while the troops retreat, walking the beach back toward today’s Jacksonville. General Daniels, who accompanied Moore’s Army, marched his troops up the river toward Jacksonville, burning everything they found along the way.

​It is only a matter of time before the English did try again, but the people of St. Augustine were determined to strengthen not only the Castillo, but the walls of the town as well! If only Francis Scott Key had been here to see these battles, but they occurred long before he was even born.

​And that ladies and gentlemen is the rest of the story! Here in St. Augustine you can actually see the Castillo de San Marcos and the mission. Our tours can show you just how this battle took place and where the British trenches were located. Our certified guides know the facts, locations, and details and are excited to share them with you. Call us for these or other “REAL” stories of St. Augustine and our nations history that have been overlooked in most historical accounts of our nation.

Until next time – Jim