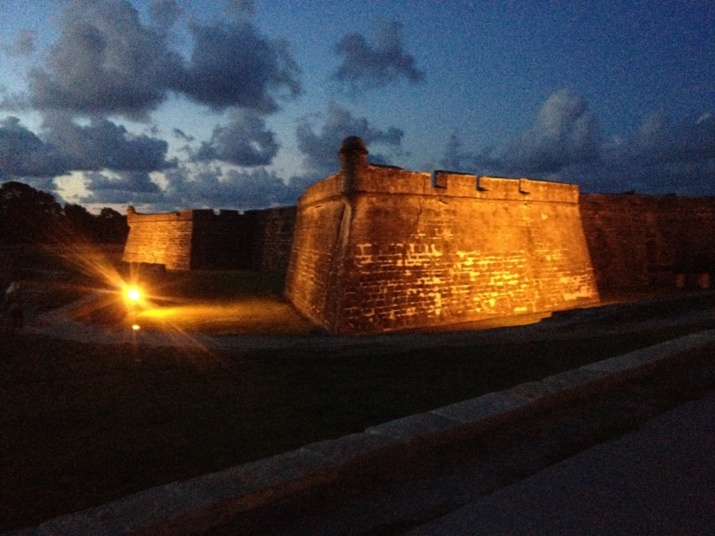 As we discussed in a previous post, the Castillo was started in 1672 and took 23 years to complete, finally opening in 1695. The Spanish ordered both Mexico and Cuba to fund and supply labor to build St. Augustine’s fort. Cuba and Mexico naturally were not to happy about this additional “taxation” by the Spanish Crown. Many times the annual situado (annual payroll) as it was called, was either not sent, shipwrecked, or even stolen while enroute, by pirates. The governor of Cuba responded to the royal decree by sending inmates who had 10 years or more left of a sentence to serve, thus freeing up his own jails and the expense of feeding prisoners. The governor of Mexico sent slaves to be used in the construction of the fort as well, as money to buy supplies, tools, and clothing necessary for the workers.

The stone Castillo de San Marcos as it would be called was an impressive structure based on Medieval “Star Forts” proven to be structurally advantages during this time. The stone fort takes the place of 9 prior wooden forts, of which 7 were built in the immediate area. The town was to the south, with its homes, shops, and church all there for the needs of the soldiers and their families who lived here. The threats of attacks by Spain’s enemies was very real, and the English were encroaching upon the Spanish territory day by day. By 1670 the English had landed at what is today Charleston (Charlestown in old days) and were progressively building a city a mere 2 days away from Spanish Florida. A threat that loomed over the city. In 1697 the Spanish Governor issued a decree that no Maize (corn) could be planted within a musket shot of Castillo de San Marcos.

(To be continued next week…)